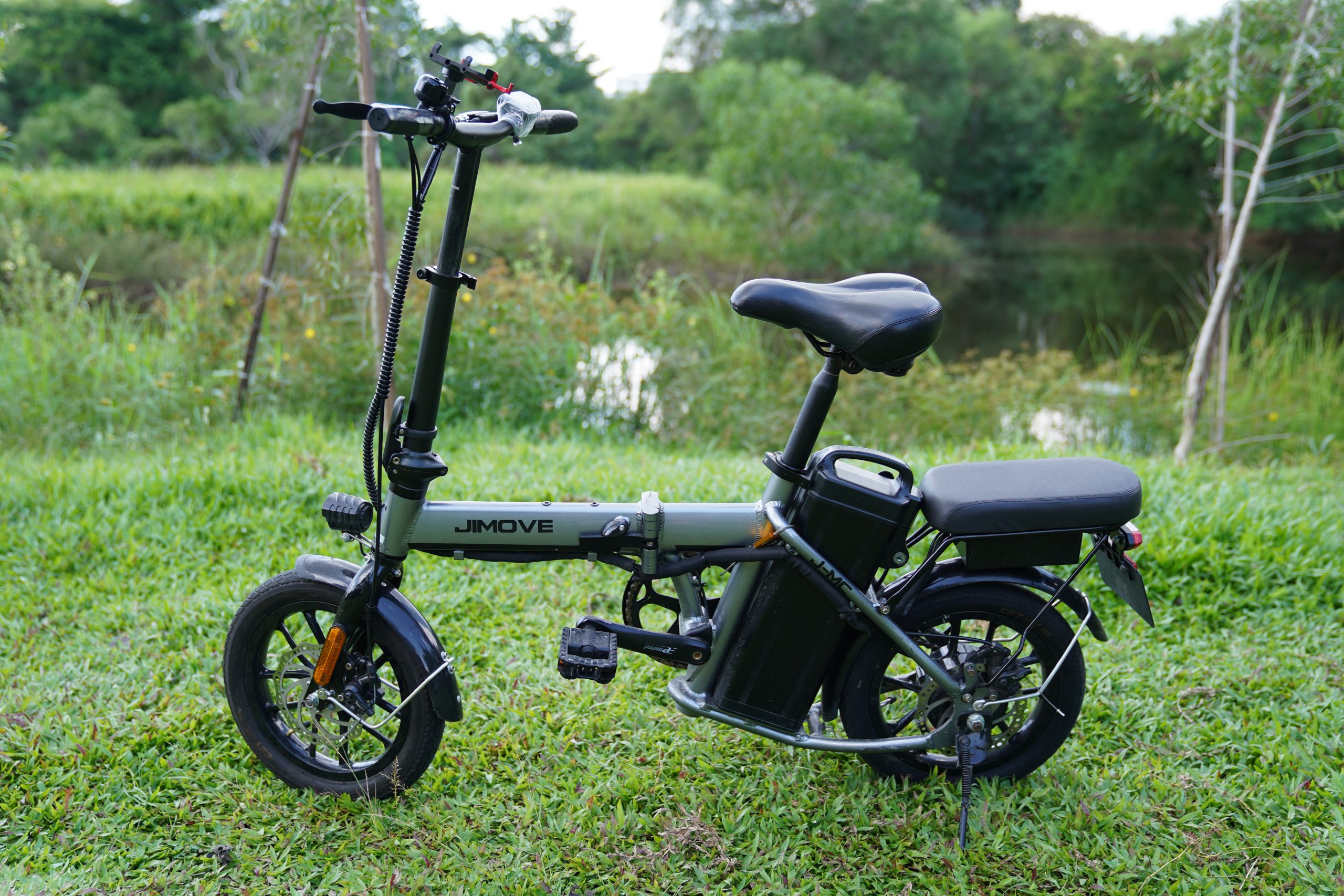 The Jimove MC is unbeatable in terms of range – it can travel up to 120km and is the ebike with the longest range in the market. It is the ebike to go for and is commonly used by both full-time and part-time food delivery riders, as the concern of it running out of battery mid-way during an order is very unlikely, even towards the end of the day.

The Jimove MC is equipped with 14” magnesium sports rims and a 36V 20.8Ah battery. It comes with a rear rack, cushion and is integrated with front & rear LED lights. The Jimove MC ebike frame is made of 6061 aluminium, which is commonly used for aircraft components. This type of aluminium has high strength and good corrosion resistance. It is also foldable and can fit into the boot of any car & public transport friendly.

Jimove MC is using the LG li-ion battery cells, compared to other ebikes that use ordinary li-ion battery cells. Although both are li-ion battery with many fire incidents, not only does the brand allow consumers to have a peace of mind, but the quality of the cells also determine it’s durability. No doubt we would like to purchase an ebike that can last for a very long time!

With some google research and additional information, LG Chem currently operates five battery-manufacturing plants, one each in South Korea, the United States, and Poland, and two in China.

Li-ion battery manufacturers are primarily based in Japan and China. However, after years of planning, China now dominates the world’s production of new generation batteries that are used in electric vehicles and most portable consumer electronics such as cell phones and laptops.

So, in other words, LG li-ion battery could also be made in China, however, rest assured, the Land Transport Authority has implemented strict regulations such as the EN15194. This is a European Standard that is intended to cover all common significant hazardous situations and event of electrically power-assisted bicycles (PAB), when used as intended and under the condition of misuse that is reasonably foreseeable by the manufacturer.

When Jimove MC was just released, it was selling at SGD $1399 and the good news is, not long ago, they reduced their price to $1199. A $200 discount! However, there’s an underlying reason why on why they are reducing their prices. It benefits consumers directly with regard to the price and they offer free delivery within 1-2 working days. However in the event that there are any issues, you’d have to head down directly to their flagship store in Geylang to rectify it, compared to the past whereby you’re able to purchase from any retailer nearest to you. This might be considered as a con only if you are not staying in the central area or central fringe regions of Singapore.

For leisure riding or food delivery?

I will rate this ebike from the point of view as a food delivery rider, as for leisure riding, there are still choices out there in terms of comfort and aesthetic. I would give this ebike 4.9 out of 5 for the range, built quality as well as the solid disc brakes which produces an acceptable amount of sound compared to regular disc brakes which may produce high pitch screeching sound when activated. However overall, I would give it a 4 out of 5 due the inconvenience that I may have to go through in the future in the event that I would like to replace original parts.

We hope this blog post has given you a clearer insight of the Jimove MC Ebike.
All our blog reviews are written by courtesy of a grabfood rider – Guidetograbfood and drivebikes.sg is not affiliated with the products mentioned in this blog.